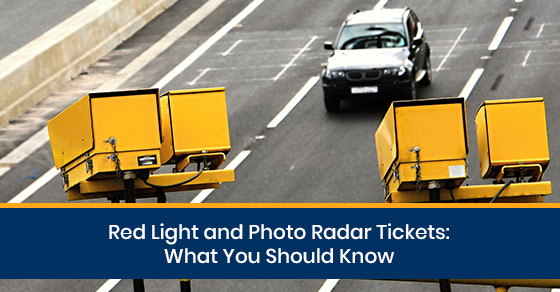 Red Light and Photo Radar Tickets: What You Should Know

Vehicle accidents seem to be an epidemic in the GTA. There has been an alarming rise in hit and runs in Toronto and surrounding areas. While pedestrians are encouraged to pay closer attention when crossing the streets, the city and province are looking for ways to keep the roads safer for drivers and pedestrians alike. As a result, the Province of Ontario has passed legislation allowing municipalities to install red-light cameras.

The cameras placed at intersections automatically photograph vehicles when they run a red light. If you fail to stop for a red light, you receive a ticket for reckless driving. This form of traffic enforcement captures an image of your vehicle during the red-light phase, helping to hopefully reduce the number of drivers choosing to run red lights. Knowing the photo provides evidence to help enforce traffic laws, drivers might not be as quick to put their pedal to the metal when they see the light change.

At this point in time, red-light photo tickets won’t affect your auto insurance, here’s what every Ontario driver should know about running red lights and photo radar tickets.

In Ontario, and more specifically Toronto, red-light running is responsible for over 40 percent of fatalities at signalized intersections. The Ontario government has found that drivers are becoming more responsible with the introduction of red-light cameras. A reduction in running red lights has already been noticed with collisions resulting in deaths and personal injuries decreasing by over 25 percent, and accidents causing property damage down by over 17 percent. As well, angle collisions, most commonly a result of running a red light, have decreased by more than 60 percent. Although traffic cameras cost approximately $150,000, they are worth the investment to save lives and reduce the risk of injuries and vehicle damages that cost drivers and insurance companies millions of dollars.

According to the City of Toronto, there are over 300 red-light cameras currently operating throughout participating municipalities, which include:

As mentioned, red-light cameras are installed at intersections. The city looks for intersections that have higher-than-usual instances of drivers running red lights as the ideal locations for camera installation. This way, they can catch more drivers entering the intersection when they are in violation. While it might seem like there’s nothing the authorities can do when you run a red light, the images capture your vehicle and license plate number, allowing them to track you and issue the citation. Because it’s legal to enter the intersection during a yellow light, if you are entering the intersection and the light is yellow but turns red halfway through, you are not penalized. As well, if you are making a left-hand turn and are already in the intersection when the light turns red, you will not receive a ticket. There are warning signs prior to arriving at the intersection to help enforce safe driving and give you the opportunity to slow down and avoid sudden, unsafe stops.

What are the consequences of running a red light?

Once your vehicle is photographed running the light, you’ll be sent a red-light camera ticket by the Ministry of Transportation. The ticket will be mailed to the address of the registered owner of the vehicle. Owners receive a photo of their vehicle running the light with the date and time the photo was taken. The penalty for running a red light is $325, and the money collected is shared between the municipality where the violation occurred and the province. Demerit points are not issued for red-light camera offences because it’s impossible to confirm the driver of the vehicle.

What if I wasn’t driving?

This is a common occurrence that can lead to a lot of frustration. If you can’t see the driver in the photo, there is little you can do, unless you have another form of proof you weren’t there, such as evidence you were at work at the time the photo was taken. You have the right to contest the ticket, but it can be very hard to win. In some cases, you might get lucky and have a reduced fine, but considering the time and effort it will take to fight the ticket, it usually isn’t worth it. Your best bet is to speak to the driver and tell them they have to pay it. In theory, you could take them to small claims court if they refuse, but again, the time and effort to do so might not be worth it. Hopefully, you are only lending your car to trusted drivers, or at least to someone with the decency to pay the fine themselves!

How do I pay the fine?

Payment is simple, as the payment instructions are provided. You can pay online, by mail, or in person.

What if I don’t pay the red-light ticket?

As the owner of the vehicle, you are responsible for paying for the ticket. If you don’t, it could result in your license plate renewal permit being refused. As well, when you don’t pay for traffic offences, you put yourself at risk for license suspension.

How do red-light tickets affect my insurance?

The only possible way you can run into insurance issues due to a red-light ticket is if you choose not to pay the fine on time, or at all. While demerit points aren’t added, and because the authorities can’t prove who was driving, generally, red-light tickets don’t affect your insurance. As mentioned above, if you don’t pay, you put yourself at risk for license suspension, which can affect your auto insurance premiums.

Understanding traffic laws will help you avoid not only penalties, but also putting yourself, fellow drivers, and pedestrians at risk. If you would like more information about auto insurance, contact us today.

Amanda began her insurance career in 2000. As a Chartered Insurance Professional (C.I.P.), Amanda is passionate about continued education for insurance professionals. Amanda teaches the Insurance Broker Licensing program through Durham College, and speaks about insurance related topics at B2B events.